Resource Portal for Students and Teachers

About this video and ocean ecosystems

Ocean ecosystems constitute more than 70% of the Earth’s surface area, and these massive watery habitats are home to some of the smallest organisms on the planet.  These abundant microscopic organisms influence climate through the production and consumption of greenhouse gases such as carbon dioxide ( CO2).

More about the HOT program

Since 1988, the Hawaii Ocean Time-series (HOT) program has studied the open ocean waters of the subtropical North Pacific Ocean, one of Earth’s largest ecosystems. More than 25 years of monthly HOT program observations have yielded numerous discoveries on the importance of microorganisms in sustaining Earth’s habitability, including the role these organisms play in the production of oxygen and consumption of  CO2 through photosynthesis. HOT measurements also highlight steady increases in ocean CO2 concentrations and seawater acidity in response to human-derived atmospheric  CO2. Such time series observations are necessary for helping to build understanding of how changes in Earth’s climate are influencing marine life. 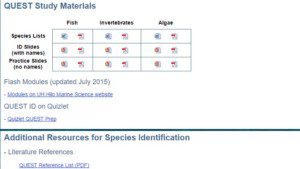 What does salinity have to do with water quality?
Salinity measurements give a good indication of the source of the water. The average ocean salinity is 35, and freshwater salinity is usually less than 0.5. Salinity values below 35 near the coast can be due to fresh water outflow and storm drainage. Storm water often picks up debris, dirt, and other pollutants and flows through the waterways directly to the ocean. An example of this is the Ala Wai Canal is Honolulu that drains the watershed encompassing Manoa and Palolo Valleys and empties into the Pacific Ocean in Waikiki.

What does temperature have to do with water quality?
Temperature impacts both the chemical and biological characteristics of surface water. It affects the dissolved oxygen level in the water, photosynthesis of aquatic plants, metabolic rates of aquatic organisms, and the sensitivity of these organisms to pollution, parasites and disease. Temperature also has an effect on the comfort level of recreational water users.

What does chlorophyll have to do with water quality?
High concentrations of the plant pigment “chlorophyll a” in coastal waters are an indicator of nutrient inputs because nutrients fuel the growth of phytoplankton. Chlorophyll a is the most commonly used parameter for monitoring phytoplankton biomass and nutrient status, as an index of water quality because large nutrient inputs can come from either storm runoff or sewage spills.

What does turbidity have to do with water quality?
Turbidity is a measure of water clarity. It tells scientists the degree to which light entering a column of water is scattered by suspended solids. Suspended solids include things such as mud, algae, plant/animal material and, when there are sewage spills, fecal material. Factors contributing to water turbidity include soil erosion, when there are sewage spills, elevated nutrient inputs, and waste discharge.

What does dissolved oxygen have to do with water quality?
Like terrestrial animals, fish and other aquatic organisms need oxygen to live. Low dissolved oxygen levels leave aquatic organisms in a weakened physical state and more susceptible to disease, parasites, and other pollutants. Oxygen levels can be reduced when run-off containing phosphate and nitrate (the ingredients in fertilizers) enters coastal waters and causes algal blooms because the algae die when the nutrients are used up and then decay, a process that consumes oxygen. A normal level of algae, however, contributes to elevated oxygen through photosynthesis, just like land plants add oxygen to our air during the day. As dissolved oxygen levels in water drop below 3.0 mg/l, aquatic life is put under stress – the lower the concentration, the greater the stress.

What does water pressure have to do with water quality?
Water pressure is an indicator of water depth, or a measure of distance from the ocean surface down to the ocean floor. In the coastal waters of Hawai‘i, changes in depth occur because of the tides. Tides are bulges of water in the ocean caused by the gravity of the sun and the moon. In some coastal areas (e.g. near estuaries), tides can re-suspend sediment, causing the water to become more turbid.

PacIOOS Water Quality PlatformsPacIOOS has a network of cabled platforms, autonomous underwater vehicles, and coastal moorings deployed in Hawai‘i and cabled platforms in each of the PacIOOS jurisdictions. These instruments measure a variety of water quality parameters including: temperature, salinity, pressure, chlorophyll florescence, turbidity, pH, dissolved oxygen, and carbon dioxide. The PacIOOS water quality platforms in Hawaii, American Samoa, and Saipan report data in near-real-time, the other water quality platforms provide data that are downloaded monthly. Archival data is available for all sensors online. The information collected at these sites is important for agencies, planners, mariners, professional and recreational water users, and the general public.

Oops! We could not locate your form.

Oops! We could not locate your form.

For each student in your household, please perform the following Daily Health Screening, so we can all work together to keep everyone safe and healthy:

1. Has anyone in your household tested positive for COVID-19?

2. Is anyone in your household on home isolation?

3. In the past 5 days: Has any household member had any of the following symptoms that are new, worsening, or not attributable to a pre-existing condition?

If you have answered YES to any of the above, please contact PAF and do not send your child for face to face activities.

Before coming to Mālama in-person activities, please help us by following the recommended guidelines:

During activities, we take steps to keep your children safe, and ask you to assist us:

At the end of the day:
Learning tools will be stored, gloves will be removed, and hands will be sanitized. When your child returns home, it is recommended that they immediately shower, washing hair and body, and that their clothing worn during the day is laundered.